Part 4. Bonus feature: tell me what you want to prove and I tell you what to look at 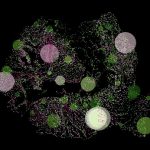 So far in our statistical investigation we have looked at the numbers from various angles, without finding any real evidence for widespread ballot stuffing by one side or the other, via the supplementary lists.

As they say, though, if you torture the data enough, it will tell you almost anything. We’re going to illustrate this point with a little exercise.

In part 2 of this series, we presented a multi-variate regression using:

This regression gave us a very accurate estimate of how each precinct voted in the second round and indicated that, by and large, there was nothing particularly fishy going on with the supplementary list votes: they went much the same way as permanent list votes. The good fit of the regression meant that a single national trend prevailed more or less everywhere, but we did nevertheless find instances that showed different results than our nationwide model predicted.

The deviant precincts we analyzed in part 3 were cases that strayed quite far from our estimates and one of them is already under investigation for election fraud. Fraud could conceivably explain the deviation from our model’s prediction there but other explanations than ballot stuffing also remain plausible. Shall we discard the alternatives and believe that fraud happened wherever the data suggest it might have happened? As we will see, this attitude would allow us to see fraud in many, many precincts, in fact virtually everywhere. How is this possible? We demonstrate how in four easy steps.

To highlight where the results were even slightly off the main trend-line in the second round, we figure out the difference between two numbers:

To highlight whether in the second round there were more temporary list voters than in the first round, we use the difference between two numbers:

Positive values mean that more people showed up at the precinct and voted on the supplementary list on November 16 than on November 2.

Make a chart for either candidate, using these two numbers. The horizontal axis will represent the change in the number of supplementary list voters — be it positive or negative. The vertical axis will show whether Ponta or Iohannis got more votes or fewer votes than our model would have expected.

Interpret the chart. We can start with the Ponta graph, since the PSD was the target of more suspicions about ballot-stuffing than the other parties.

As you can see, the chart is divided into four quadrants. The horizontal axis, with the change in number of temporary list voters, shows whether more people or fewer people showed up on November 16 compared to November 2. The vertical axis shows where Ponta gets more votes or fewer votes than in the national average.

The easiest way to understand the chart is to look at the upper right quadrant. There, Ponta gets more votes than expected, and this coincides with an increase in the number of temporary voters. So we could argue that maybe these extra temporary votes were far more favorable towards the candidate than the national trend captured by our regression model would lead us to believe. Hence any precinct that falls in the upper right or the lower left quadrant could be construed as a place where Ponta was helped by the temporary votes (via fraud or otherwise).

The opposite interpretation applies to the remaining two quadrants. The upper left and lower right quadrants show the cases that support the opposite suspicion, i.e. that temporary voters who only voted in the first or the second round were unusually supportive of the other candidate, Iohannis.

What strikes us in the chart is first of all that is that there are far fewer precincts in the upper and lower left quadrants than in the two quadrants on the right. This is because the turnout of temporary  list voters typically increased in the second round, as did turnout among permanent list voters. What is not trivial is the striking symmetry in the chart between the upper and lower half. There is not a visible cluster of precincts where an unexpectedly strong, or unusually weak, vote for Ponta would associate with either a substantial increase or a substantial decrease in the number of supplementary list voter. Rather, it all looks like random deviations from a nationwide trend whereby the predictions of our apparently fraud-free model coincide with outcomes in the precincts. 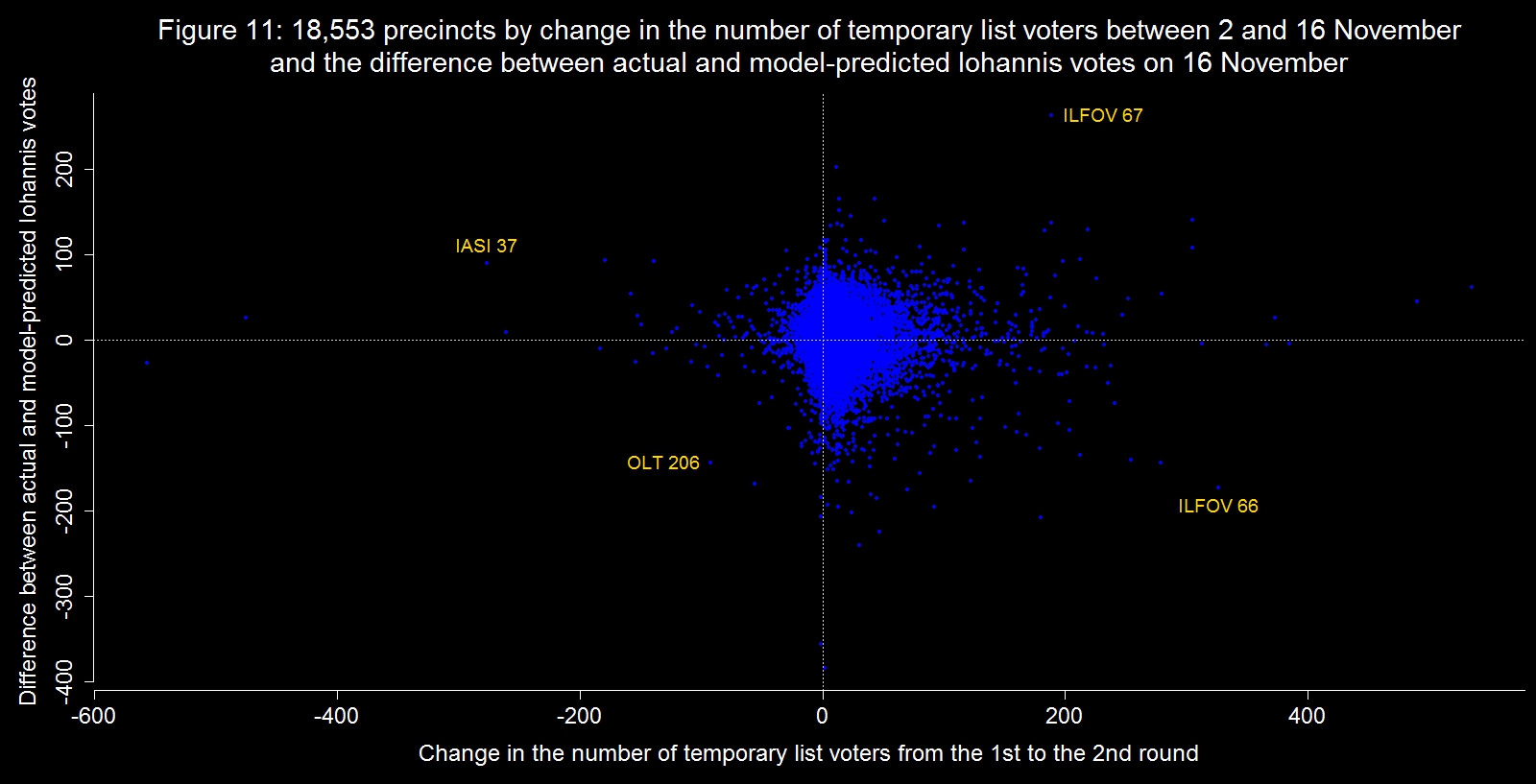 The chart about the Iohannis vote is structured the same as the one about Ponta. The horizontal axis, with the change in number the temporary list voters, shows whether more people or fewer people showed up on November 16 compared to November 2. The vertical axis shows where Iohannis got more or fewer votes than his national average on November 16.

The cases are pretty evenly split into groups that support the theory that Ponta benefits from the unusual behavior of temporary votes and those that suggest that Iohannis benefits more from that.

So does this prove anything? Only that any of these cases can be cited as an example of fraud, if we disregard the alternative explanation — that some parameters of the nationwide model simply do not fit the vote in these places. Whether a case is a possible “example” of fraud from one party or another depends on which quadrant of the chart the precinct falls in. Sure, some examples are more dramatic than others because they talk of, say, 100 votes rather than a few. But there are just as many instances to accuse one side of fraud as there are to make the opposite case. If we were to handpick cases that are the best illustrations of one theory or its opposite, then we should focus on those precincts that are marked in both chart.

Make up your mind if you want to prove the guilt of Ponta or Iohannis and our chart tells you which precinct to pick as your evidence of ballot stuffing with temporary list voters.  Want to argue that the Ponta side was the culprit? Write a story about precinct 497 in Dolj or Caras-Severin No. 104, or maybe about Iasi No. 37 or Ilfov No. 68. Want to suggest that the Iohannis camp bused around fraudulent voters multiple times? You can probably do no better than focusing on Ilfov No. 67, Olt No. 206, or maybe Iasi No. 149.

Read The Romanian riddle of the supplementary list vote

Read Part 2. A finer analysis of the vote. Did the supplementary lists make a difference?

Donation via paypal from your visitors